The R830 series’ automation process allows it to run completely unsupervised. Just add the reagents in advance and the R830 series takes care of everything else. 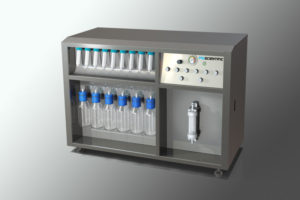 Features an average coupling rate of >99%, due to the thorough mixing achieved by the 180°Inversion Mixing Technology. This is especially good for the synthesis of long and difficult peptides.

Amino acid is only dissolved right before coupling to prevent the decomposition of the Fmoc from the amino acid.

Tubing and valves are cleaned automatically after each reagent delivery to eliminate the possible cross contamination.

GLP software is easy to learn, use and program.